Equal parts richness and sweetness, Port is a red, fortified wine that hails from the Porto region in the Douro Valley of Portugal. Ruby Port, the red variety, and Tawny Port, a golden-hued wine that has been aged longer as thus loses its red color, are the most typical varieties, although white ports are also made. Because of it’s sweetness, Port is typically served after dinner, with dessert, and while dark chocolate just might be the most quintessential pairing, a cigar or even smoked meats or nuts pair nicely too. To truly enjoy this complex variety, it’s best to explore — enjoy this two-day tasting itinerary to seek out some of the best Ports and dessert wines that Sonoma County has to offer. 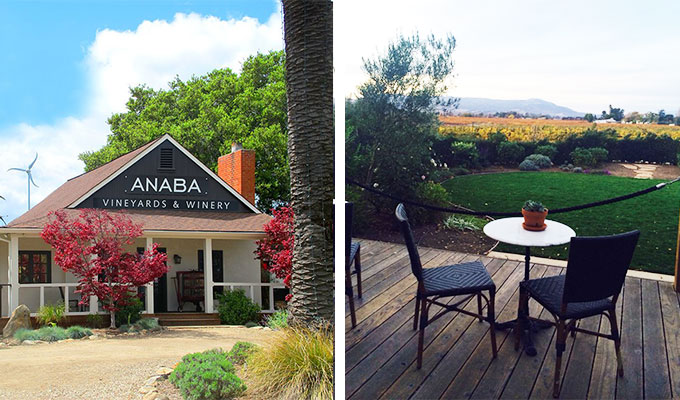 Situated in a small repurposed farmhouse on Highway 12, Anaba Wines’ tasting room is the culmination of founder John Sweazey’s 25-year dream to produce Pinot Noir and Chardonnay wines like those he tasted during his many trips to the Rhone Valley in France. Tastings are held on the covered patio, where visitors take in stunning views of the estate vineyards and Sonoma mountain. Ask about the white port-style dessert wine called Aero Port, as well as the late-harvest Viognier.

Stop at Angelo’s Wine Country Deli for lunch after tasting. 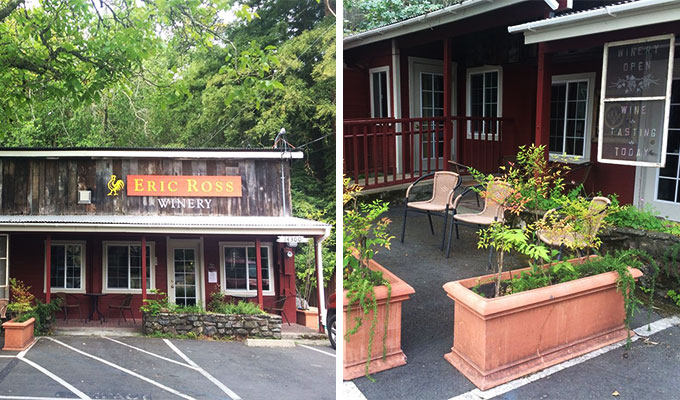 Winemaker Eric Luse, who was once a photographer for the San Francisco Chronicle, founded Eric Ross Winery in 1993. Eric, who tells the story of the property’s resident rooster nearly getting hit by a load of grapes being brought to the crush pad at harvest one year, thought it only fitting that the rooster be included on the label. While focusing on Pinot Noir, Marsanne-Roussanne, and Syrah, Eric Ross creates a few thousand cases a year. Two ports are produced—the Glen Ellen Winery Struttin’ Red Port made from four Portuguese varieties, and Dry Creek Valley Old Vine Zinfandel Port, made from 90-year-old vines.

To work up a thirst, spend some time exploring at nearby Jack London State Historic Park before stopping by Eric Ross when they open at 11 a.m.

From Anaba Wines, turn left onto Highway 116 North. Drive 5.1 miles, taking the second exit onto Arnold Drive at the roundabout. 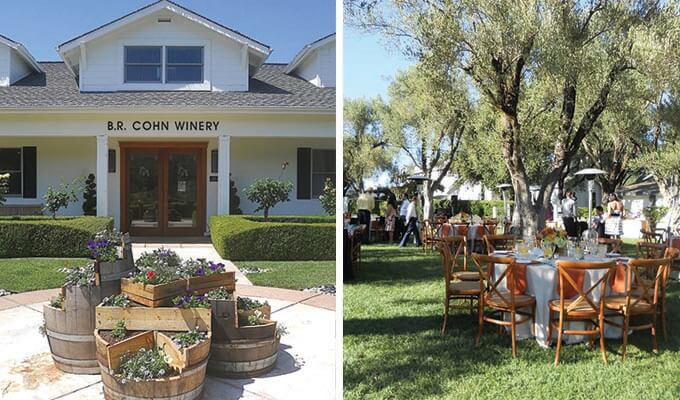 Bruce Cohn, manager of rock and roll band the Doobie Brothers, sold the grapes grown on his Olive Hill Estate vineyard to nearby wineries for nearly a decade before founding B.R. Cohn Winery in 1984. After seeing nearby wineries produce world-class wines from grapes grown on his land, he had decided it was time to create his own label. Today, the estate is known both for their award winning wines and olive oils, as well as their rock and roll roots. Tastings are held in the property’s ranch house, where visitors enjoy estate wines and get to take a look at the Doobie Brothers memorabilia hanging on the walls. Sweeter offerings include the lush Olive Hill Estate Cabernet Sauvignon Port, and the late-harvest Sémillon, a Sauternes-style dessert wine with notes of honey and stone fruit.

Stop by the on-site gourmet shop to taste the estate olive oil and barrel-aged vinegars.

From Eric Ross Winery, turn right onto Highway 12 South. Turn left onto Madrone Road. At the end of the road, turn left onto Sonoma Highway. The winery is on the left. 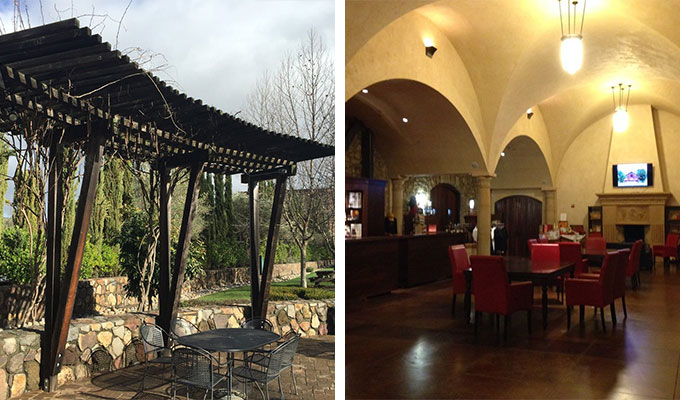 Sebastiani Vineyards and Winery, named for original owner who immigrated from Italy, has an Italian influence apparent immediately in the architecture of the stone archways at the driveway. Even the tasting room has an Old-World feel: there’s a cavernous quality to it, much like the enotecas in Tuscany. Sebastiani’s white dessert wine (California Symphony) is a blend of Symphony and Moscato (though not quite as sweet as typical Moscato), and is great for someone who wants to try a sweet wine that’s not as rich as port. They also produce a late-harvest Petite Sirah from Guenoc Valley that the winery describes as having a mix of Tawny and Port characters. To partake in these treats, sign up for the Wine and Chocolate Bar Tasting, or maybe even the Chocolate Indulgence tasting (reservations required for Indulgence tasting).

From downtown Sonoma, drive west on East Napa Street. The winery is on the right. 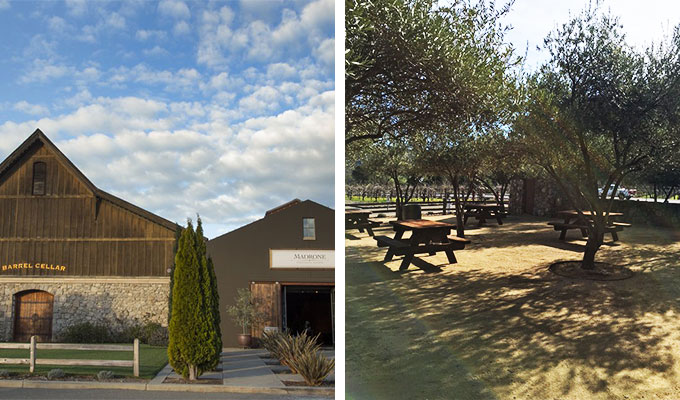 Madrone Vineyard Estate, Glen Ellen’s oldest operating winery, has been making wine for more than 150 years. The winery underwent a name change to Valley of the Moon for many years, but the original name was reinstated in 2012 when the Stewart family took the helm. While focusing on small-lot, estate-grown wines, Madrone offers visitors a taste of Sonoma grape-growing history — the estate’s Old Vine Zinfandel plants are more than a century old. Samples can be sipped at the traditional tasting bar, in the new tasting lounge, or on the patio, where the vibe is warm and cozy — perfect for savoring a taste.

Madrone Vineyard Estate is only 2.5 miles from Sonoma Valley Regional Park, so work up some thirst with a pre-tasting hike through the the sprawling property.

From Sebastiani Vineyards, turn right onto East Napa Street. Turn right onto Sonoma Highway. Turn left onto Madrone Road. The winery is on the right. 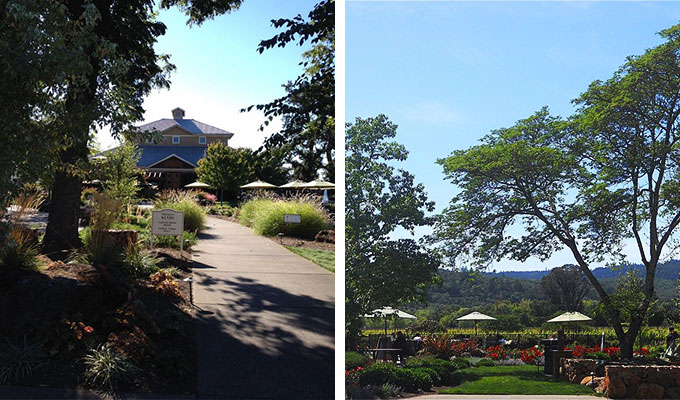 Kenwood’s Kunde Family Winery boasts beautiful views and grounds, an ideal setting for tasting the property’s estate wines. Spend a few minutes relaxing in the tranquility of the ponds and fountains in front of the tasting room before treating yourself to a taste of the Port-style 1904 Dessert Cuvée made from estate Zinfandel. For a unique experience, ask about the hike and taste program that’s offered monthly: it’s a great opportunity to witness the winery’s sustainable growing practices and enjoy the beauty of the land firsthand.

Stop by Kenwood Restaurant and Bar for dinner — it’s closeby, and popular with the locals.

From Madrone Vineyard Estate, turn left onto Sonoma Highway. The winery will be on the right.

Move over Champagne–Sonoma County is home to a wide range of sparkling wines. Here’s where…

Where to go Wine Tasting in Guerneville,…

10 Most Beautiful Wineries in Sonoma County

Sonoma County is all gorgeous, but when you want to sip wine from beautiful tasting…