Hanson of Sonoma: From Organic Vodka to Hand Sanitizer

Courtesy of Nat and Cody Gantz

After building their artisan Hanson of Sonoma distillery from the ground up, the Hanson family has gained a loyal following for their organic, non-GMO, grape-based vodkas and single malt whiskeys made in the heart of Sonoma. But when regulations surrounding Covid-19 turned their beloved Sonoma community upside down, the Hanson family knew they had to do something to help.

Using the abundance of alcohol available to them at their distillery, the Hansons made the call to switch 100% of their production from organic spirits to hand sanitizer during this crisis. Though easier said than done, the Hansons are grateful to have found a purposeful way to support their community-at-large during these unprecedented times. 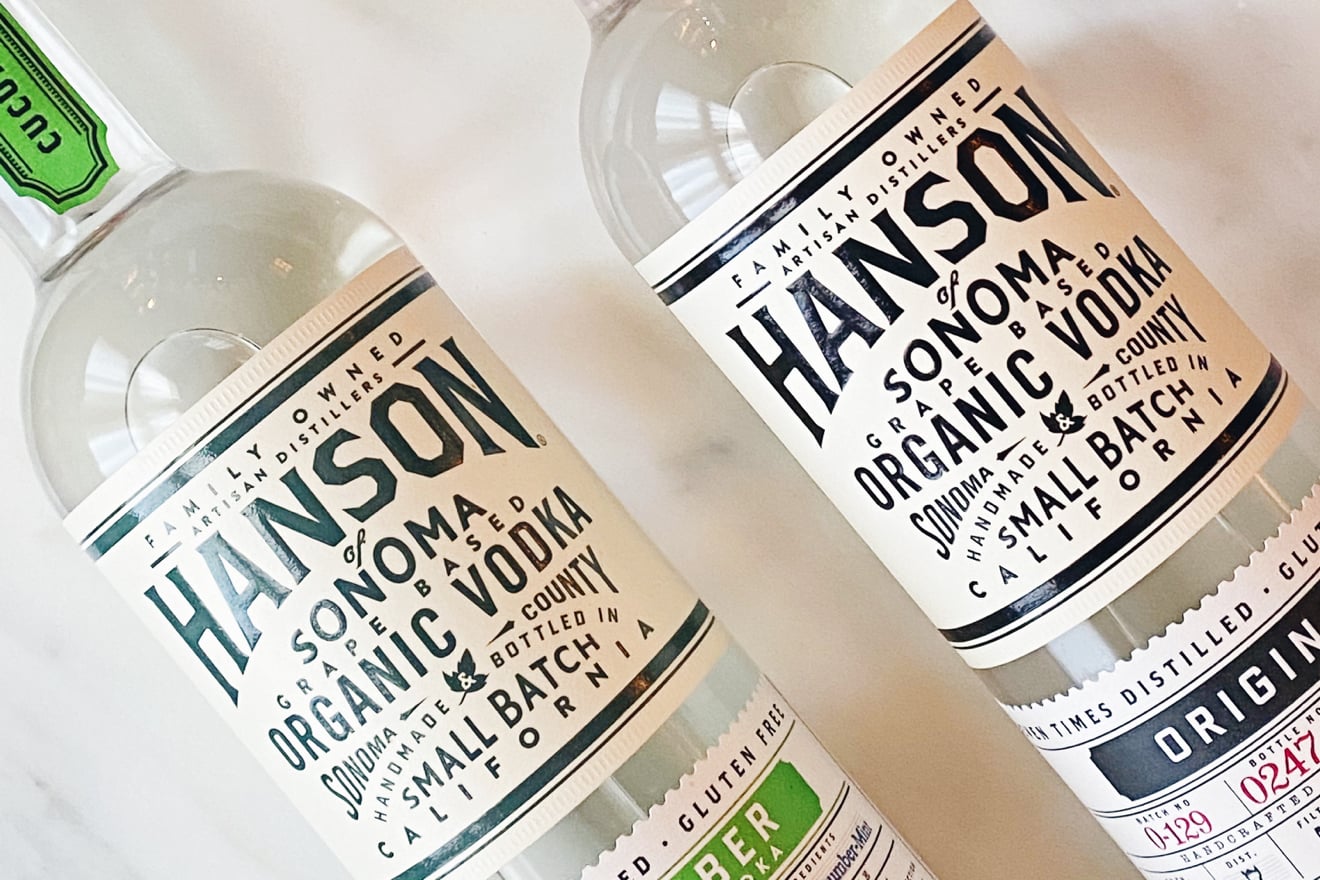 No strangers to taking risks, the Hanson family spent countless hours researching and testing before launching their organic, grape-based vodka — the first of its kind — which utilizes organic grapes and other ingredients grown locally in Sonoma. While mainly focused on vodka and naturally-flavored vodkas, they also produce a single malt double barrel whiskey. Though President and CEO Scott Hanson admits they have received a few inquiries over the years about selling their alcohol for sanitizer, it wasn’t something the family felt compelled to consider until Covid-19 came into play.

“After we had to shut down our tasting room, we started getting calls from large sanitizer companies about our alcohol, since production is far outweighing alcohol availability right now,” explains Scott. “We decided to sell and donate several batches on the premise the sanitizer would be distributed throughout the Bay Area, but we realized there was no real accountability for these companies to do so.” Thus, explains Scott, “we decided to make our own hand sanitizer to support our community, which has supported us so much over the years.”

Since the team didn’t have the proper equipment for producing small bottles of hand sanitizer initially, everything was done by hand, which meant that production was slow. However, after a local company lent their filling machine and the Hansons acquired a small labeling machine, their production has doubled each week. It also has allowed the Hansons to bring back some of the employees they had to furlough. “Those first batches were donated to first responders, but now we’re able to offer hospital grade hand sanitizer to individuals for a minimal charge. We’ve also been able to bring back some of our employees and offer curbside pick-up and local delivery of our sanitizer, vodkas, whiskey, and even pre-mixed cocktails. Whatever we can offer people to help them right now, we’re doing it.” 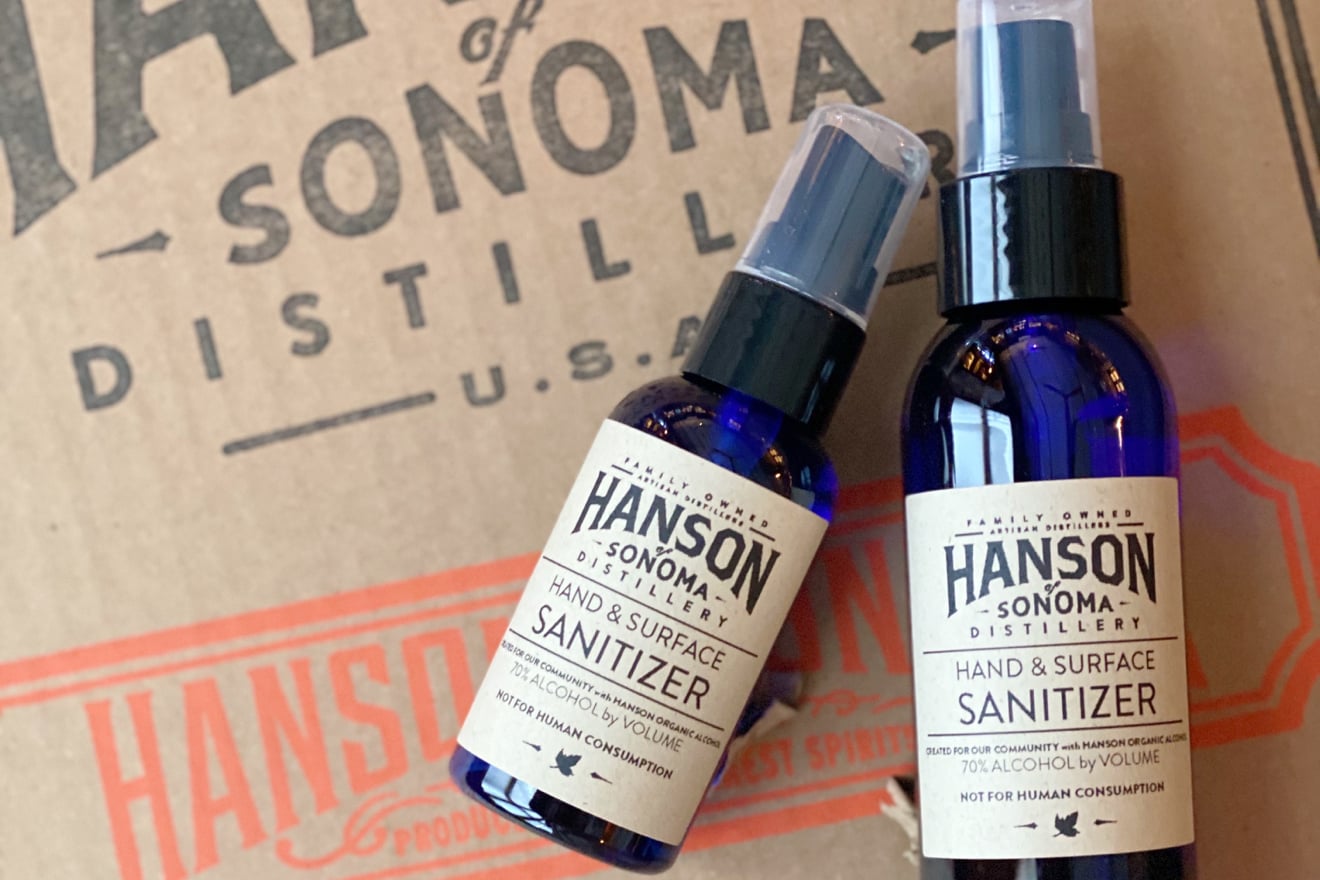 Despite the long hours and six and seven-day work weeks, the Hansons feel fortunate to be able to do something that’s valuable during these circumstances. “There’s far more demand than we ever imagined, and producing sanitizer will mean we will have to reduce our future spirits output, but we’re very happy to be able to convert our alcohol to something that’s more important to our community right now.”

Hanson of Sonoma’s hand sanitizers are made with 70% alcohol and can be purchased online, while supplies last. Sanitizers are available in 2 oz, 4 oz, 6 oz, and 8 oz sizes. They are also offering pre-batched cocktails (only available for curbside pick-up) and their full lineup of organic vodkas and whiskey.

Photos courtesy of Hanson of Sonoma

Hana-Lee Sedgwick is a writer and editor based in her hometown of Santa Barbara, California. Specializing in all things wine, food, and travel, her work regularly appears in publications such as Santa Barbara Magazine, The Tasting Panel, and Edible. Whether for work or play, she never tires of exploring California wine country. Follow her on Instagram at @wanderandwine or visit her blog, wanderandwine.com.