An Introduction to Sonoma County AVAs

Located north of San Francisco and bordering the rugged coastline of the Pacific Ocean, Sonoma County is one of the most recognized wine regions in California, and for good reason. This expansive growing region (roughly double the size of neighboring Napa Valley) produces some of the finest examples of wine in California, where varied climatic and geographical conditions allow for a diverse range of grapes to be grown. In fact, there are over 60 grape varieties grown in Sonoma Wine Country, spread throughout its 19 distinct appellations.

From forested valleys where coastal fog hangs thick and low to mountainous areas with sunshine-filled days, Sonoma’s American Viticultural Areas (AVAs) are as diverse as the grapes that grow within their borders. Whether you’re new to Sonoma and want to get to know the lay of the land or are an avid drinker of Sonoma County wine and are ready to take your knowledge of the region up a notch, our quick guide to Sonoma’s AVAs will help you better understand what makes this Northern California wine region, and its wines, so special. 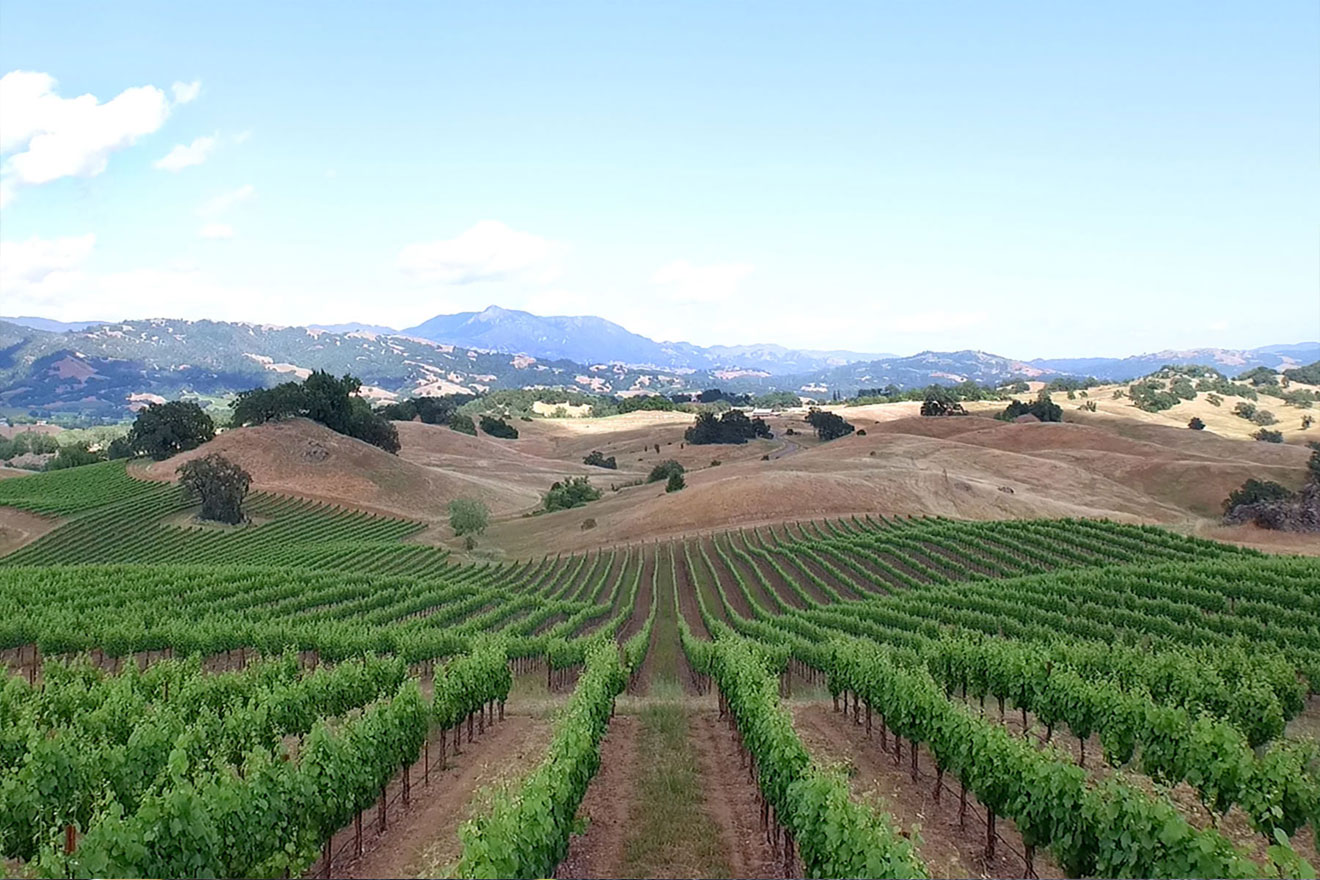 Located at the northern end of Sonoma County surrounding Geyserville, Alexander Valley — established as an AVA in 1984 — is a respected inland growing area known for structured yet elegant cabernet sauvignon. While it gets quite hot during the day, its proximity to the Russian River (and the fog that comes with it) allows the valley to cool off considerably at night. Cabernet may be king here, but the region also produces full-bodied chardonnay and some unusual grapes like sangiovese.

Established in 2003, Bennett Valley is a smaller appellation known for its small, grower-operated wineries. The Valley benefits from the rare combination of volcanic, rocky soil and moderately cool marine influences such as morning fog and ocean breezes, which allow for a long growing season. Grapes like merlot and chardonnay tend to shine here, as well as cool-climate cabernet sauvignon, cabernet franc, and syrah.

Recognized as an AVA in 1983, Chalk Hill differentiates itself from other parts of the greater Russian River Valley (of which it is partially situated) because of its warmer climate, chalky soils from ancient volcanic ash, and higher elevations. Known for its mineral-driven white wines, particularly chardonnay and sauvignon blanc, Chalk Hill is also home to grapes like cabernet sauvignon, cabernet franc, and zinfandel. 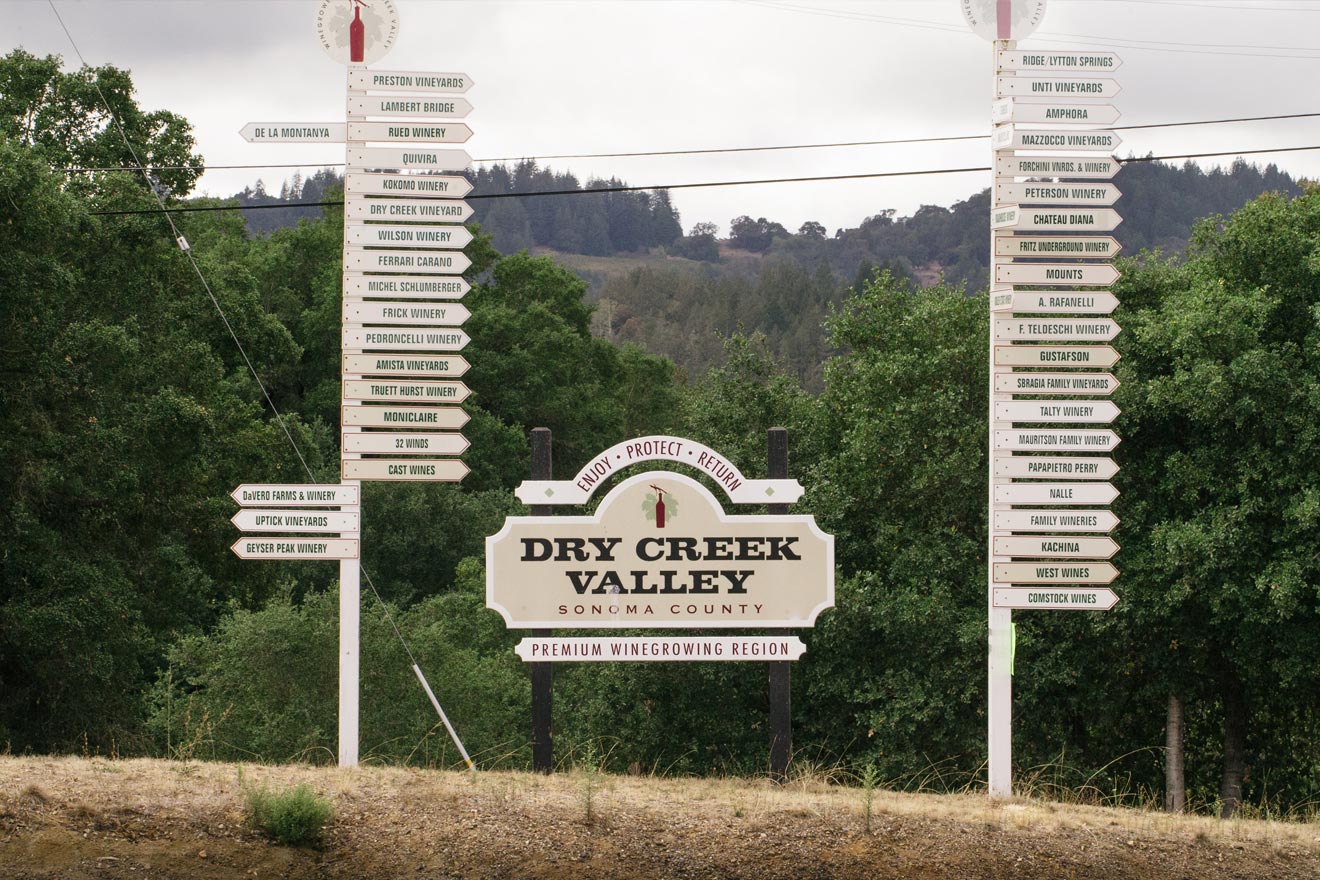 Located north of the Russian River Valley between Northern Sonoma and Alexander Valley, Dry Creek Valley is a bucolic region spanning roughly 16 miles long and two miles wide. Situated just outside of Healdsburg, this densely planted appellation enjoys a reputation for producing renowned wines, such as cabernet sauvignon and even some Rhône wines, but is most known for its powerful and nuanced zinfandels — some of which are grown on old vines.

Established in 2012, the Fort Ross-Seaview AVA is located in the heart of the Sonoma Coast AVA. One of the closest appellations to the Pacific Ocean, the region is defined by its narrow valleys and mountainous terrain, where vines soar above the fog line on steep ridges roughly 900 to 1,200 feet above sea level. Despite the challenges of growing grapes here, the coastal conditions and diverse soils prove ideal for growing exceptional chardonnay and pinot noir.

At the eastern edge of Sonoma County is Fountaingrove, a newer AVA noted for its cabernet sauvignon and Bordeaux varieties. Comprising only 600 acres of vineyards, nearly all of which are family-owned, this region is distinct because of its well-draining volcanic soils, hillside vineyards, and warmer climate. You won’t find a lot of wine tourism here, however, as most of the vineyards sell their grapes directly to other wineries. 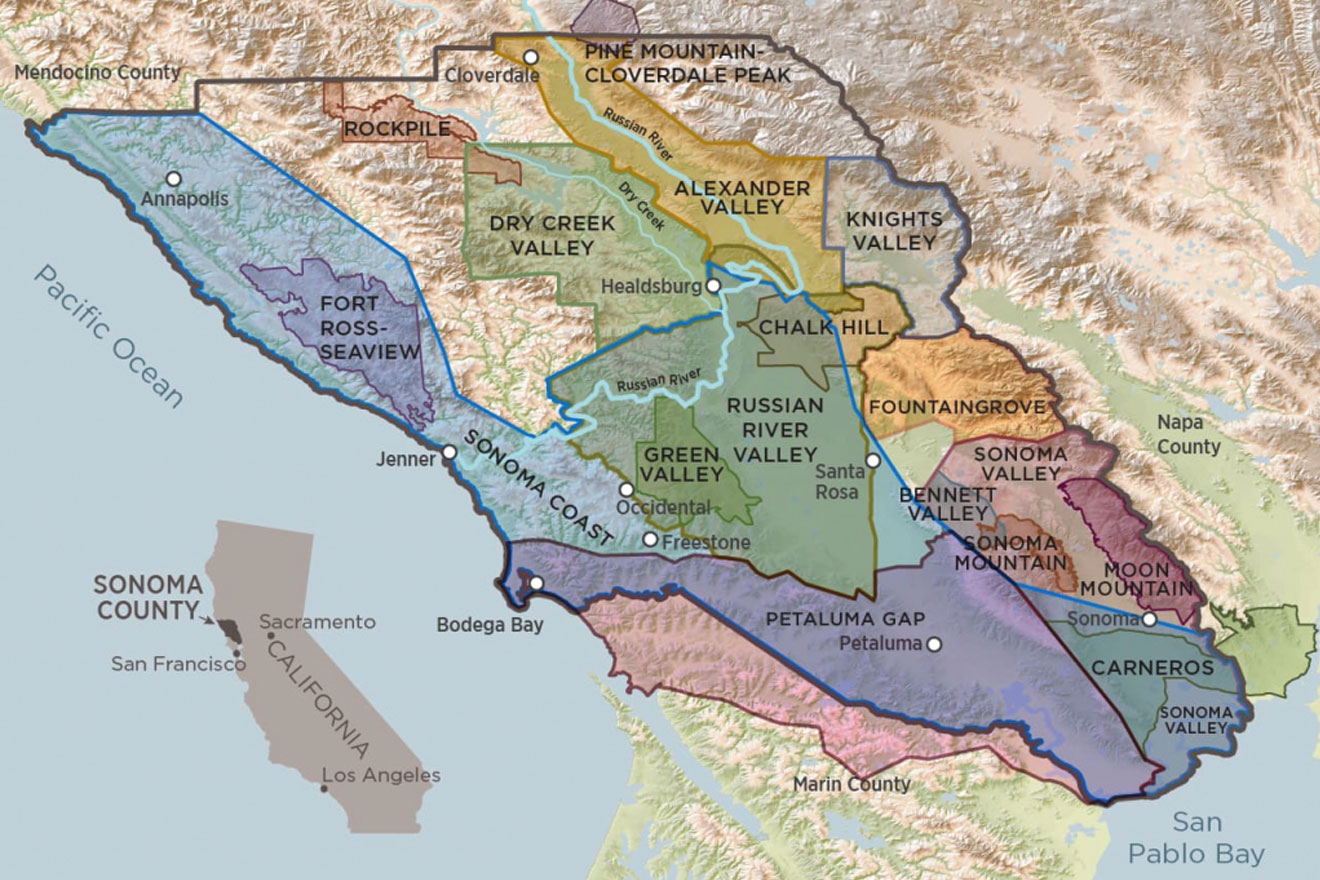 One of the coolest appellations in Sonoma County, Green Valley is a subregion inside the Russian River Valley bounded by the towns of Forestville, Occidental, and Sebastopol. Most of the soil here is sandy, fast-draining soil, which, when combined with Green Valley’s trademark foggy weather, is just right for making distinctive pinot noir and chardonnay wines.

On the eastern edge of Sonoma County lies Knights Valley, a warm growing region nestled between the Mayacamas mountain range and the base of Mount St. Helena. The valley’s mineral-rich volcanic soils and sunshine-filled days are ideal for producing cabernet sauvignon, which is the most prominent grape here, however there are a range of other grapes grown, like merlot, zinfandel, chardonnay, and sauvignon blanc. 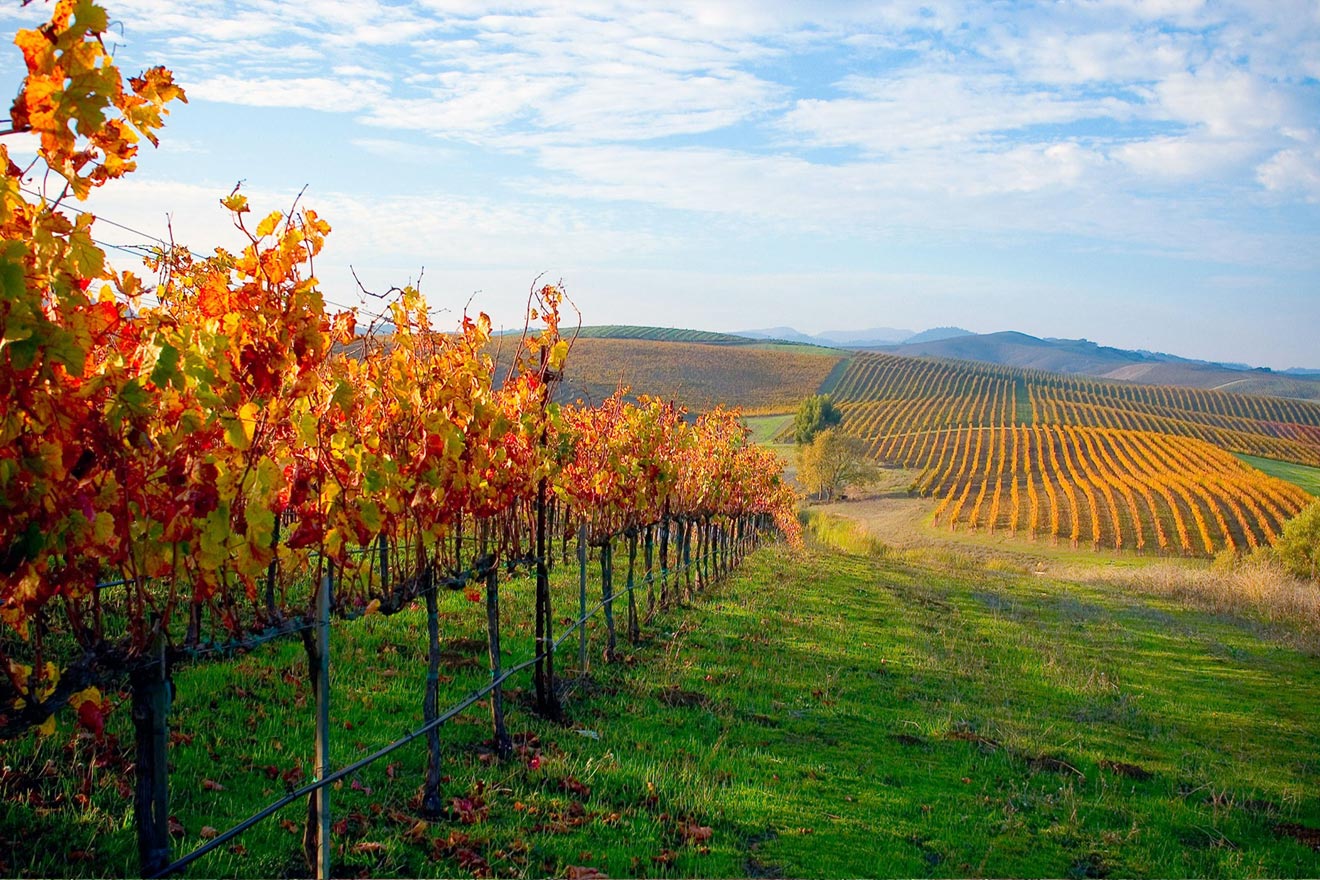 Situated at the southern end of Sonoma Valley straddling the Napa-Sonoma county line, the cool Carneros AVA is the first California wine region to be defined by climate rather than political boundaries. What makes this area unique is its close proximity to both the Pacific and the San Pablo Bay, allowing fog and wind to reach the grapes. Most influential to Caneros’ microclimate is the Petaluma Wind Gap, which brings in a constant flow of cooling air, offsetting the warmth from the sun. Here, pinot noir and chardonnay dominate the plantings, and the resulting wines are delicate with Burgundian-style characteristics. Given the cool conditions, it’s also a spectacular site for producing sparkling wine.

Located on the hills above the city of Sonoma, Moon Mountain is a high elevation region that became an official AVA in 2013. Elevation is a key defining factor of this Sonoma appellation, where hillside vineyards soar between 400 and 2,200 feet in elevation. The mountainous conditions and constant breezes prove favorable for growing structured cabernet sauvignon, zinfandel, syrah, and merlot.

Established as an AVA in 1990, this expansive appellation encompasses Chalk Hill, Knights Valley, Alexander Valley, Dry Creek Valley, Russian River Valley, most of Green Valley, and portions of Rockpile and Pine Mountain-Cloverdale Peak. With elevations ranging from valley floors to mountain peaks, nearly every type of grape grown in Sonoma County is represented in this AVA. Cabernet sauvignon, zinfandel, pinot noir, chardonnay, and sauvignon blanc are the most widely planted grapes of this region. 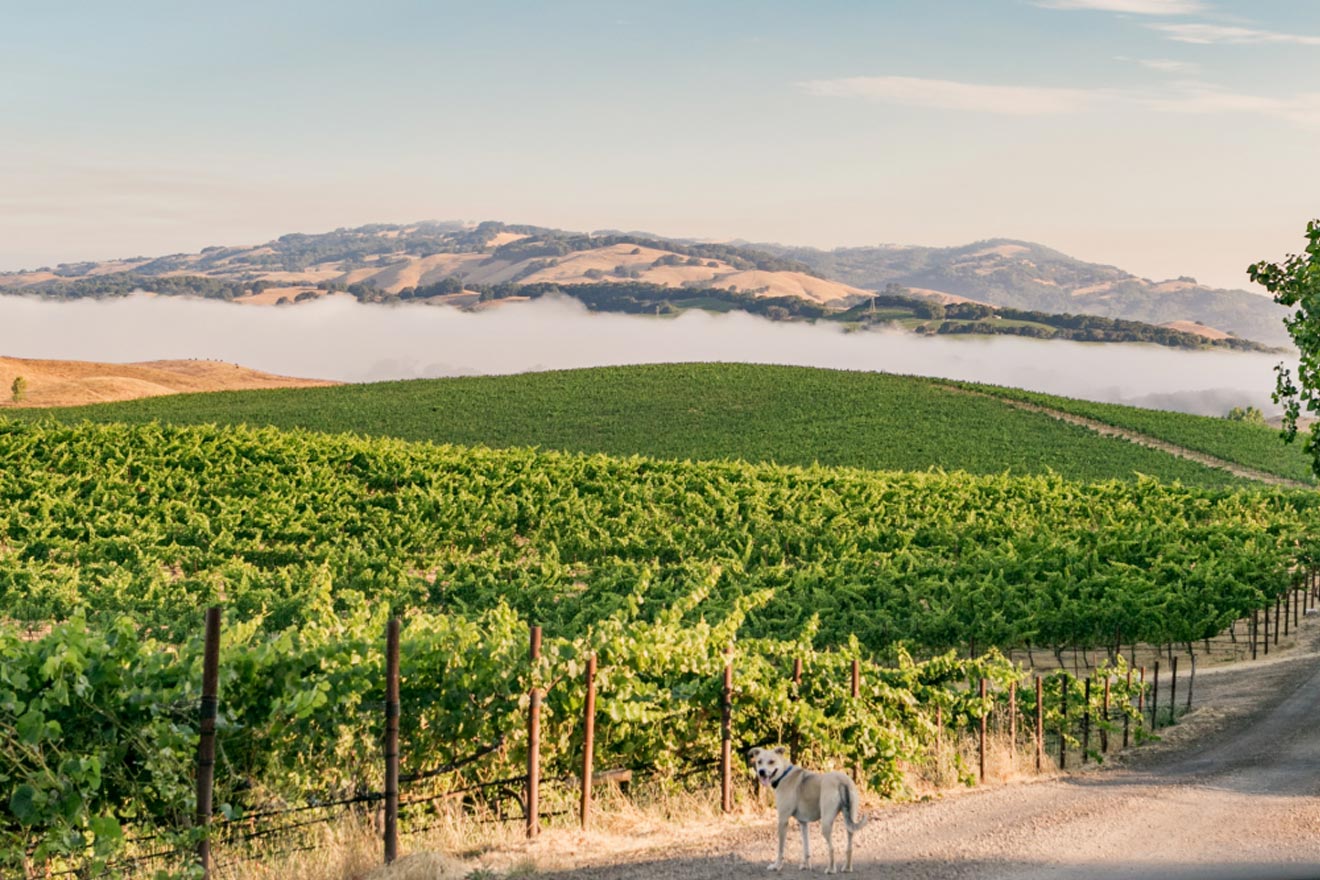 Located only 25 miles north of San Francisco surrounding the town of Petaluma, Petaluma Gap is one of the newer winegrowing regions to be established in Sonoma County, recognized as an AVA in 2017. This distinctive region, planted to over 4,000 acres of vines, sees large diurnal temperature shifts from day to night, thanks to strong coastal influences like heavy fog and wind that funnel in from San Pablo Bay. About 75% of the region is dedicated to cool-climate darling pinot noir, while the remainder is planted to chardonnay and syrah.

Located at the top of Pine Mountain at elevations between 1,600 and 2,600 feet, this small, mountainous AVA on the border of Sonoma and Mendocino counties is one of the highest grape growing regions in California. Its steep topography, rocky volcanic soils, and cool, yet sunshine-filled days above the fog line provide idyllic conditions for complex cabernet sauvignon, for which it is most known for. You’ll also find small amounts of zinfandel, merlot, malbec, and sauvignon blanc planted.

This dramatic, rugged AVA on the west of Lake Sonoma is known for its red varieties, such as zinfandel. The terroir here is heavily influenced by the high elevation (roughly 1,900 feet), where rocky soils, steep hillsides, and long days with plenty of sun exposure allow the grapes to develop more concentrated, rich flavors. Besides zinfandel, you’ll find small amounts of cabernet sauvignon, petite sirah, merlot, and syrah, though there are no wineries to visit. 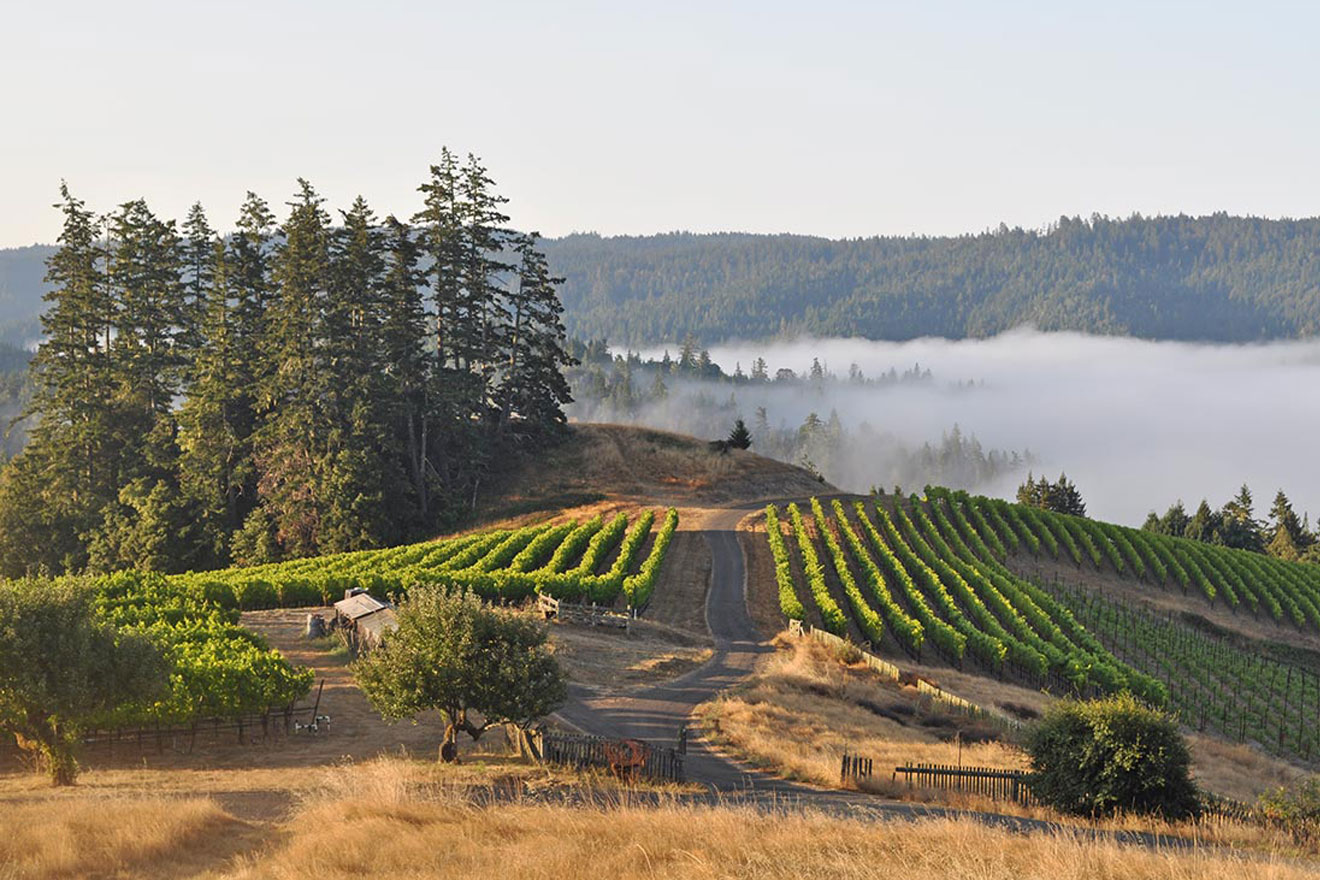 Known for its cool climate and high rainfall, the Sonoma Coast AVA (Sonoma’s largest AVA) is an expansive appellation extending from San Pablo Bay to the border of Mendocino. Not surprisingly, pinot noir and chardonnay are the stars here, which benefit from the region’s cool temperatures and direct exposure to marine influences.

Rising above the town of Glen Ellen, within the larger Sonoma Valley AVA, Sonoma Mountain is a small appellation known for its rocky soils, high altitude, and long days of direct sunlight. Despite the all-day exposure to the sun, grapevines benefit from cooling overnight temperatures, thereby allowing the grapes to retain acidity and slow the ripening process. While it’s not common to find cabernet, pinot noir, chardonnay, and zinfandel successfully growing within the same AVA, Sonoma Mountain has become recognized for all these grapes. 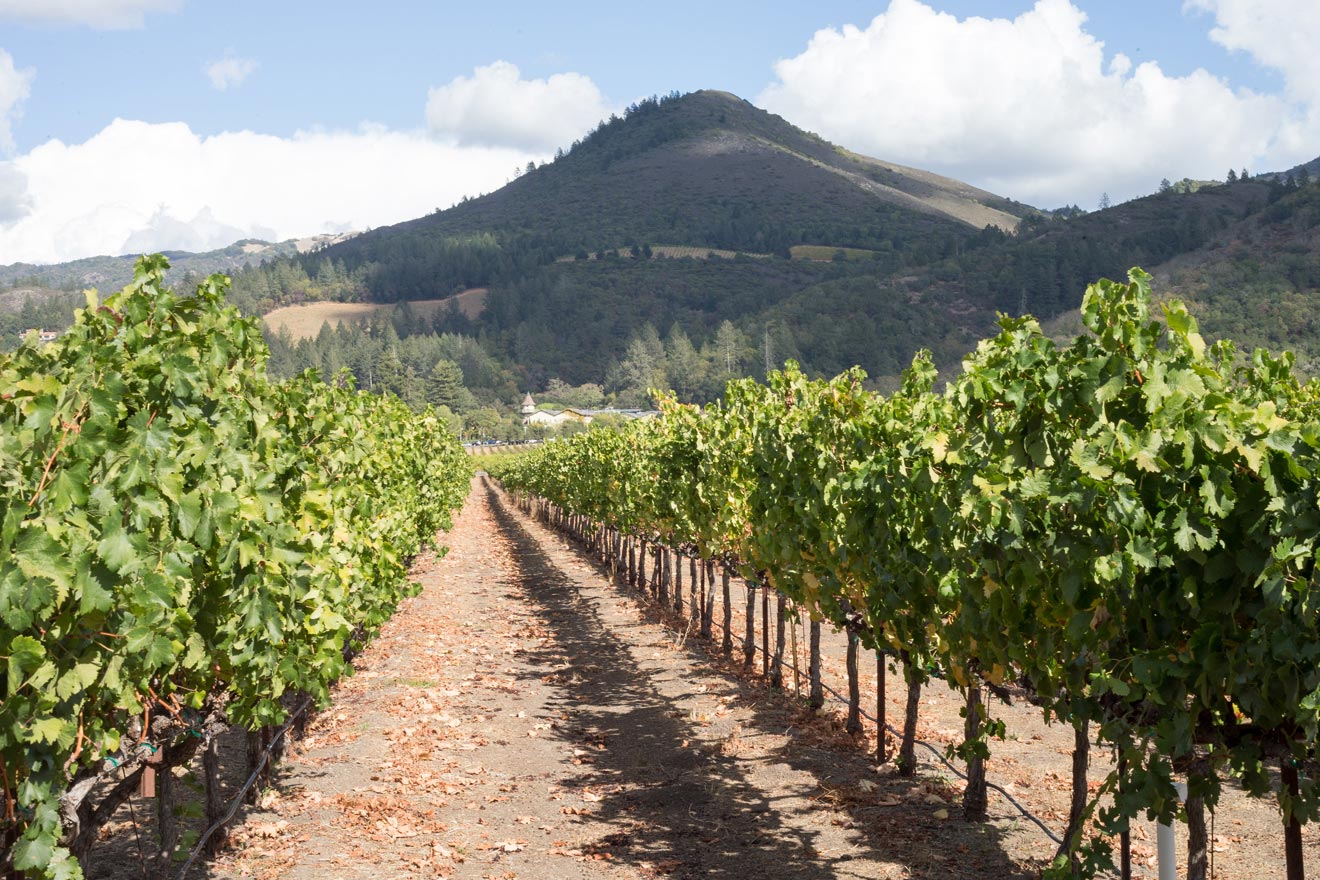 Bordered by the Mayacamas Mountains to the east and the Sonoma Mountains to the west, Sonoma Valley is one of the oldest Sonoma AVAs, founded in 1981. Known as the birthplace of Sonoma County wine, with a tradition of wine making dating back over 150 years, this historically significant AVA is now home to over 80 wineries, including the oldest continuously operating family winery in California. Recognized for producing softer, more supple wines, a wide range of grapes do well in this region, including merlot, syrah, cabernet sauvignon, zinfandel, chardonnay, and pinot noir.

The West Sonoma Coast is the 19th and newest AVA in Sonoma County. Only recently approved as an AVA in May 2022, West Sonoma is located within the westernmost portion of Sonoma County, hugging the steep, wild terrain of the Sonoma coastline. Comprised of three sub-AVAs, including Annapolis, the Fort Ross-Seaview AVA, and Freestone-Occidental, this region is known for its distinct style of cool-climate wines, ditacted by its close proximity to the Pacific Ocean. From pinot noir to chardonnay to syrah, the wines from West Sonoma tend to highlight bright acidity, pure varietal character, and moderate levels of alcohol.


Ready to explore more of Sonoma Wine Country and its wines? Here’s a run-down of the Top Sonoma County Wines you should be sipping, as well as the Small-Production Wineries of Sonoma to take note of. And be sure to check out our Guide to Alexander Valley Cabernet Sauvignon and our Insider’s Guide to the Dry Creek Valley for when you’re ready to plan your next wine tasting getaway to Wine Country.

Hana-Lee Sedgwick is a writer and editor based in Santa Barbara, California. A Certified Specialist of Wine and Sommelier, Hana-Lee specializes in all things wine, food, and travel, and her work regularly appears in publications such as The Tasting Panel, Edible, and Food & Home. Whether for work or play, she never tires of exploring California wine country. Follow her on Instagram at @wanderandwine or visit her blog, wanderandwine.com.