From March 21-25, 2018, the historic Sonoma Plaza will be temporarily transformed into Sonomawood. Host of the 21st annual Sonoma International Film Festival, Sonomawood pairs 100 hand-selected films with some of the best wine and food that Wine Country has to offer.

Need more convincing? The five-day festival is also a great excuse to plan a visit to Wine Country and show your support for Sonoma County as it continues to recover from the devastating North Bay Fires. 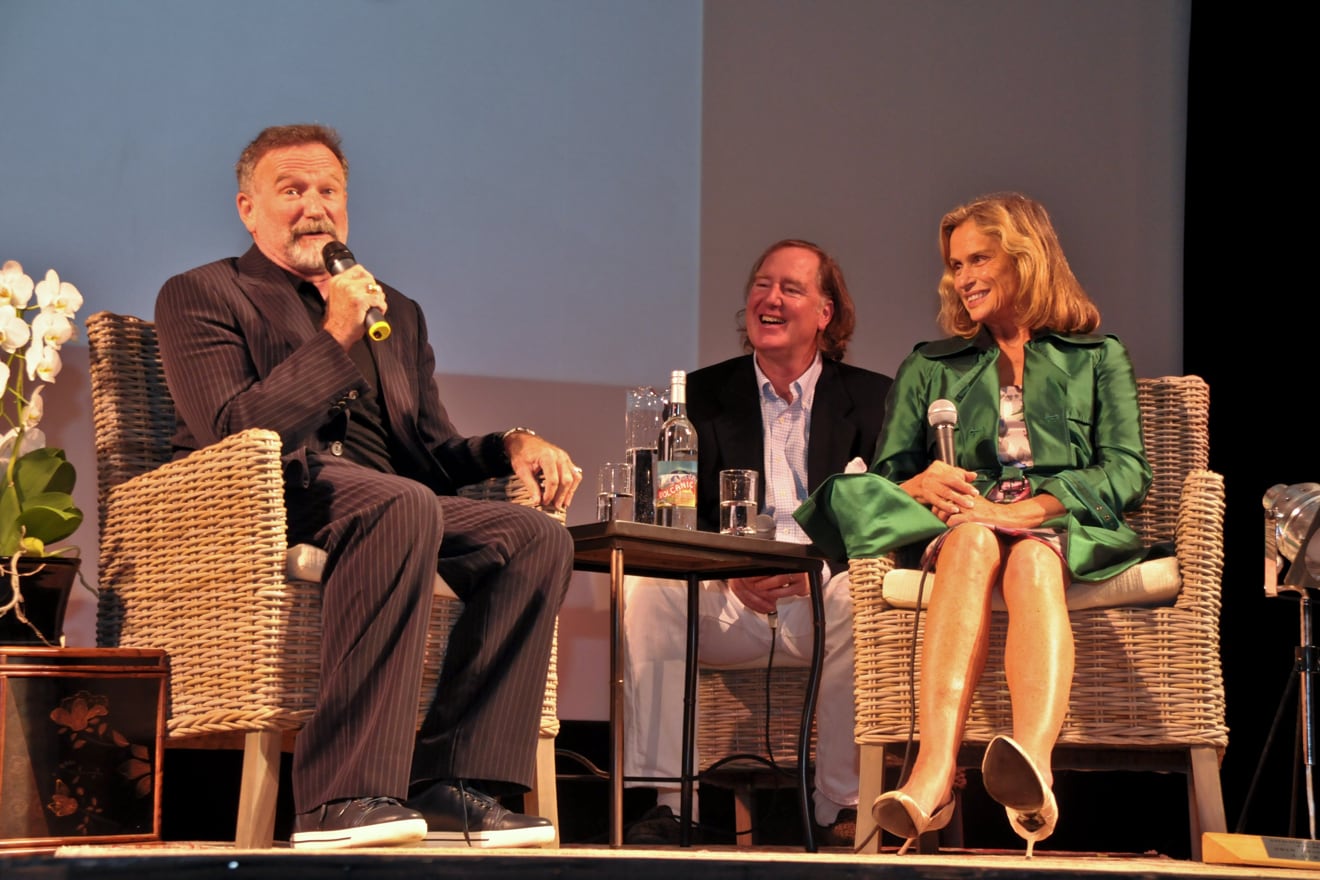 Whether you’re a film fanatic or simply hoping to view a couple films in between wine tastings on your Wine Country vacation, the Sonoma International Film Festival has a pass for you with multiple ticketing options to fit any budget and schedule.

The Soiree Pass is essentially the all-access VIP pass for attendees that don’t want to miss a beat. For $725, you’ll get priority access to all films, the Backlot Tent VIP area, the Opening Night Reception, events and parties, plus priority offerings and discounted tickets to special dinners and receptions. Buy two or four passes and you can save up to $400.

If you don’t need the star treatment, the Cinema Pass gives movie buffs access to all films, panels, and the Backlot Tent (during daytime hours) for $225. For those with a limited budget or tight schedule, the Punch Card is ideal. Priced at just $35, it’s good for entree into any four films of your choice. Lastly, the casual festival-goer can purchase single film tickets online for $15. 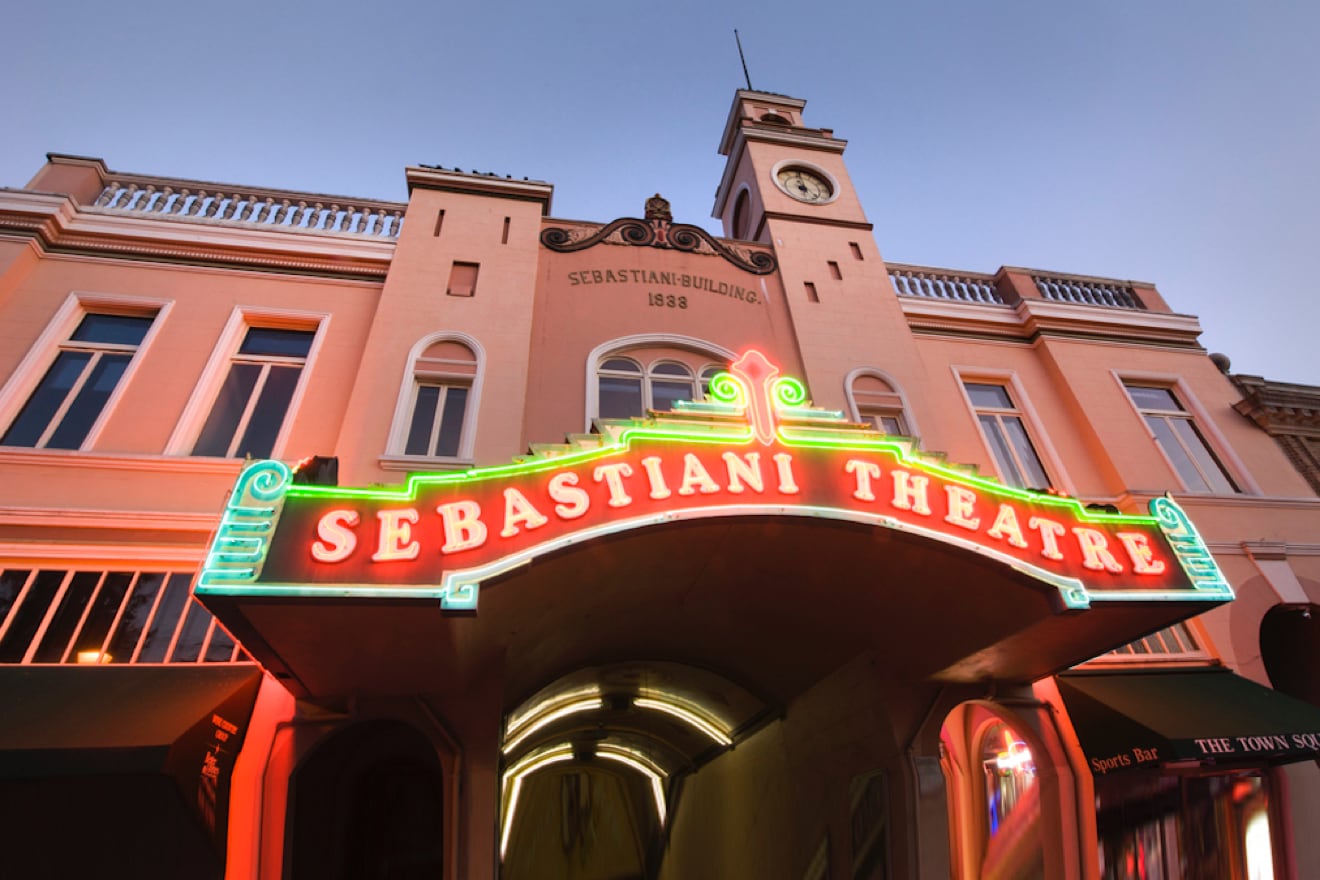 The Sonoma International Film Festival is unique in that it’s one of the only walkable festivals in existence. Attendees can easily hop between seven state-of-the-art screening venues in downtown Sonoma, including the historic Sebastiani Theatre built in 1933 and the Sonoma Valley Museum of Art. Don’t feel like walking? Catch a ride on the Sonoma Valley Wine Trolley instead.

In between showings, you’ll want to mingle in the Backlot Tent, the festival’s main hub featuring the work of local artists, wine tasting stations, and food pairings from Sonoma winery chefs.

One hundred films – including independent features, world cinema, documentaries, shorts, and animation – will be screened over the festival’s five days. Unfortunately, it’s virtually impossible to see them all, so we’re here to help you narrow down the options. 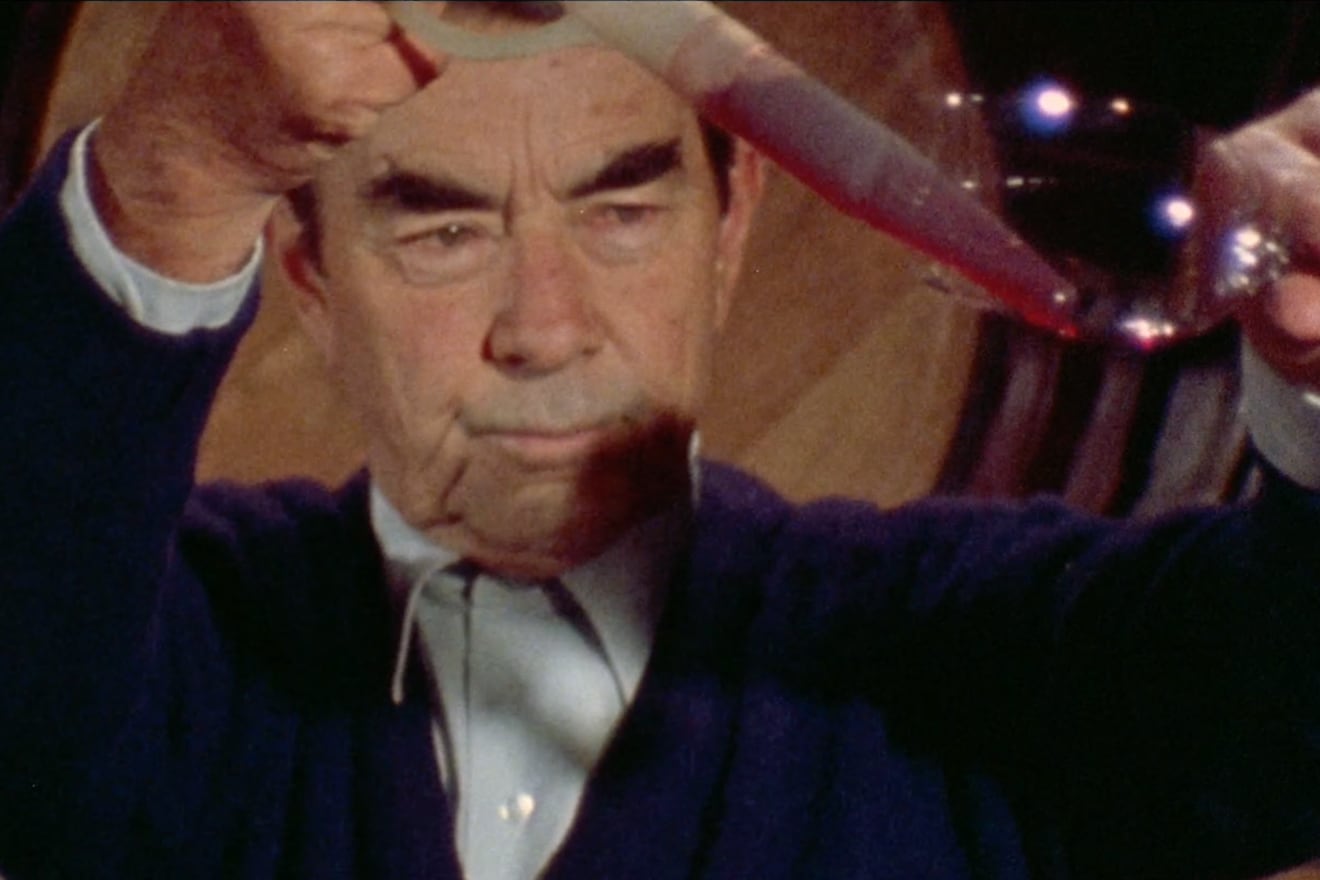 Still from Andre: The Voice of Wine

Wine not watch a film about wine whilst in Wine Country? Don’t miss André: The Voice of Wine, a documentary about André Tchelistcheff, a Russian who had a big hand in the rebirth of the California wine industry after Prohibition. Taking things abroad, Back to Burgundy and Grand Cru are set in the famous wine region of Burgundy, France, while The Miracle of Alto Adige helps you discover a region in Italy you’ve probably never heard of. 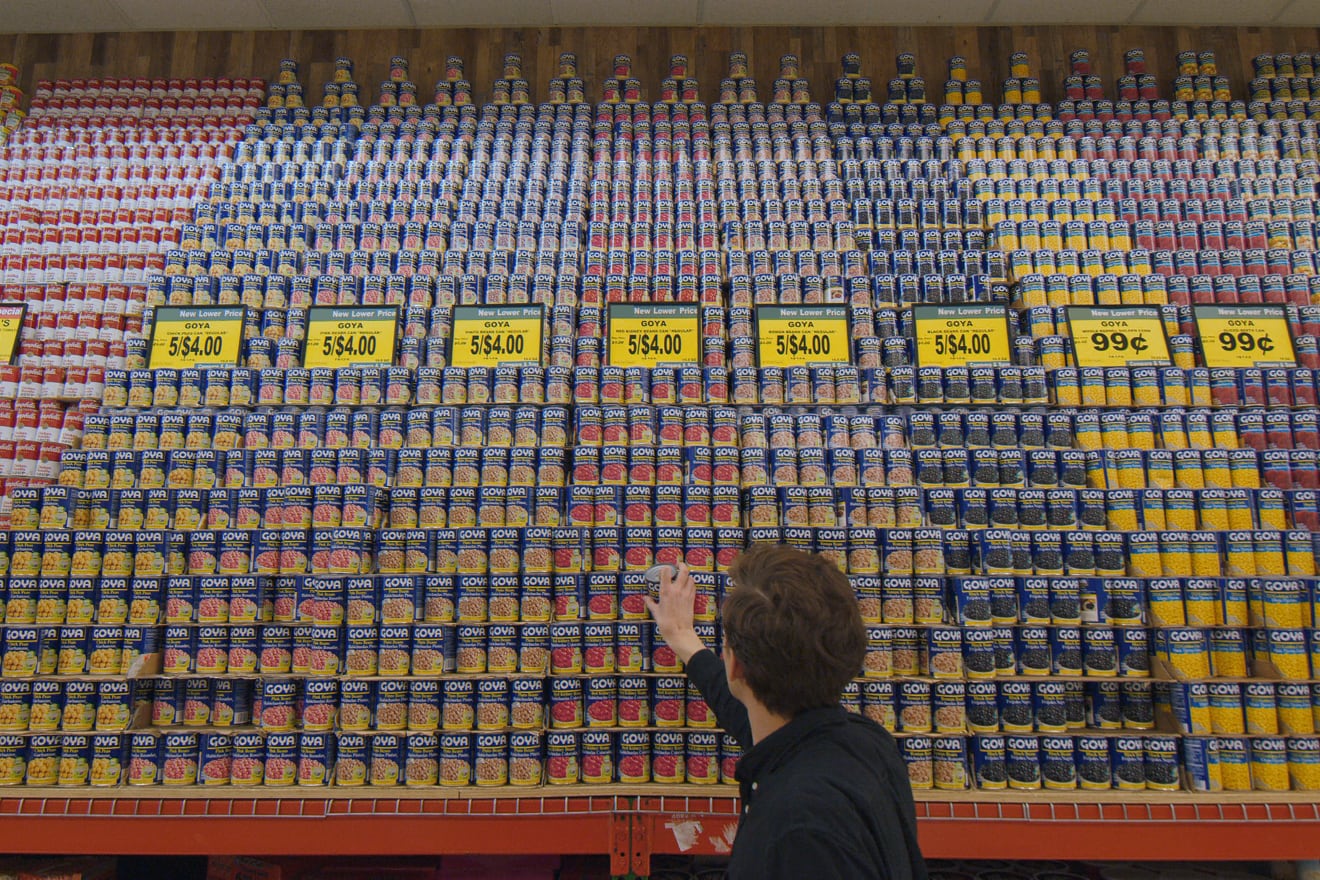 Still from Wasted! The Story of Food Waste

It’s a good thing there are some fantastic restaurants in Sonoma, because many of this year’s films are bound to make you hungry. Don’t miss Jacques Pepin: The Art of Craft, about none other than revolutionary French-American chef Jacques Pepin. There’s also The Chef at the Palace and Food on the Go, and a few that may even change the way you think about food, like Wasted! The Story of Food Waste and Modified, a discussion on GMOs.

For Women and Feminists 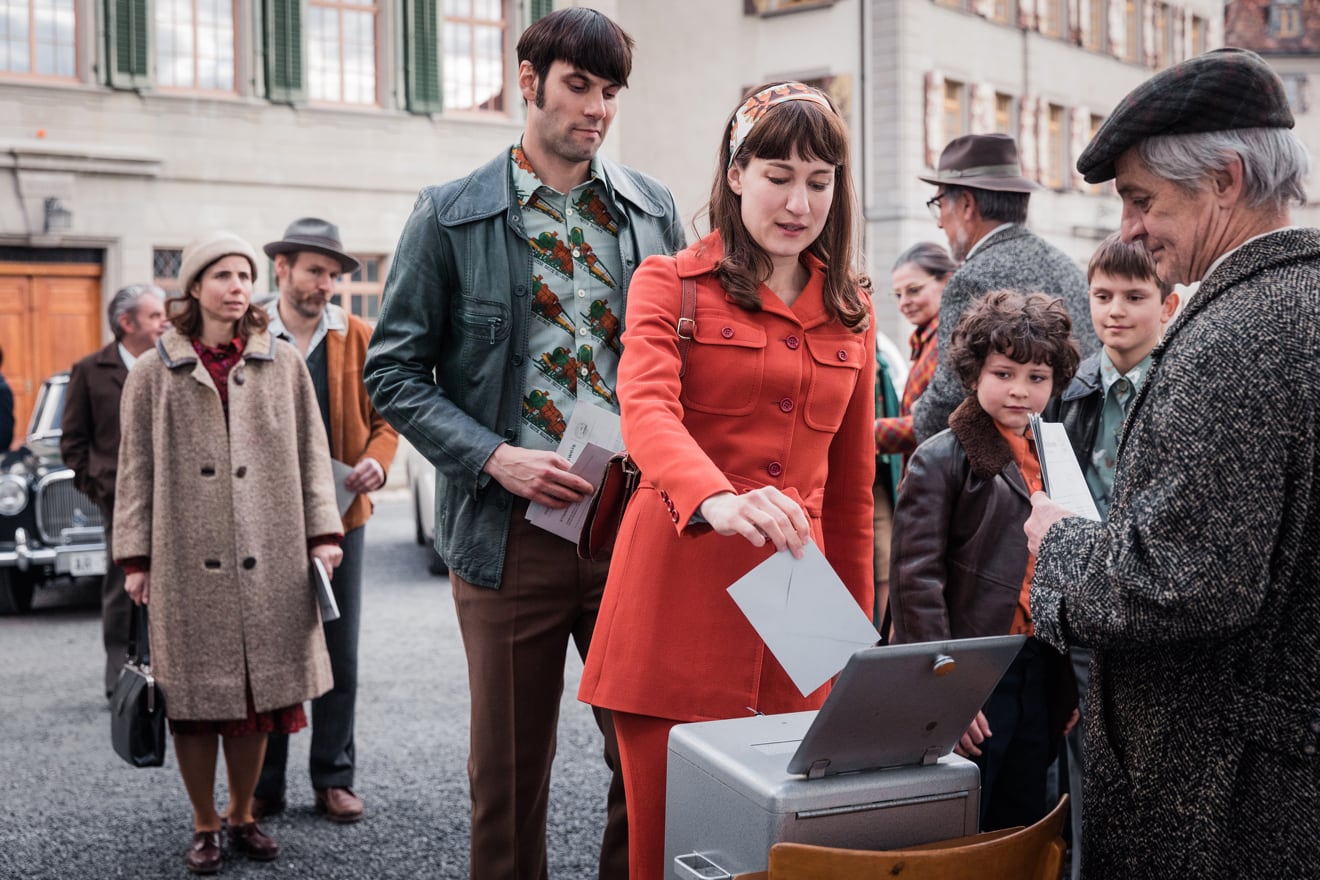 Still from The Divine Order

Women empowerment is an ever-present theme in film lately, and there’s no shortage of girl power films at this year’s festival. You’ll want to see Girls Level Up, a documentary about a Pakistani woman who teaches young girls in Silicon Valley how to design their own video game, and The Divine Order, an uplifting tale of Switzerland’s suffragette movement in the 1970s. Keeping current, Mary Janes: The Women of Weed, takes a look at how women are impacting the growing cannabis industry. 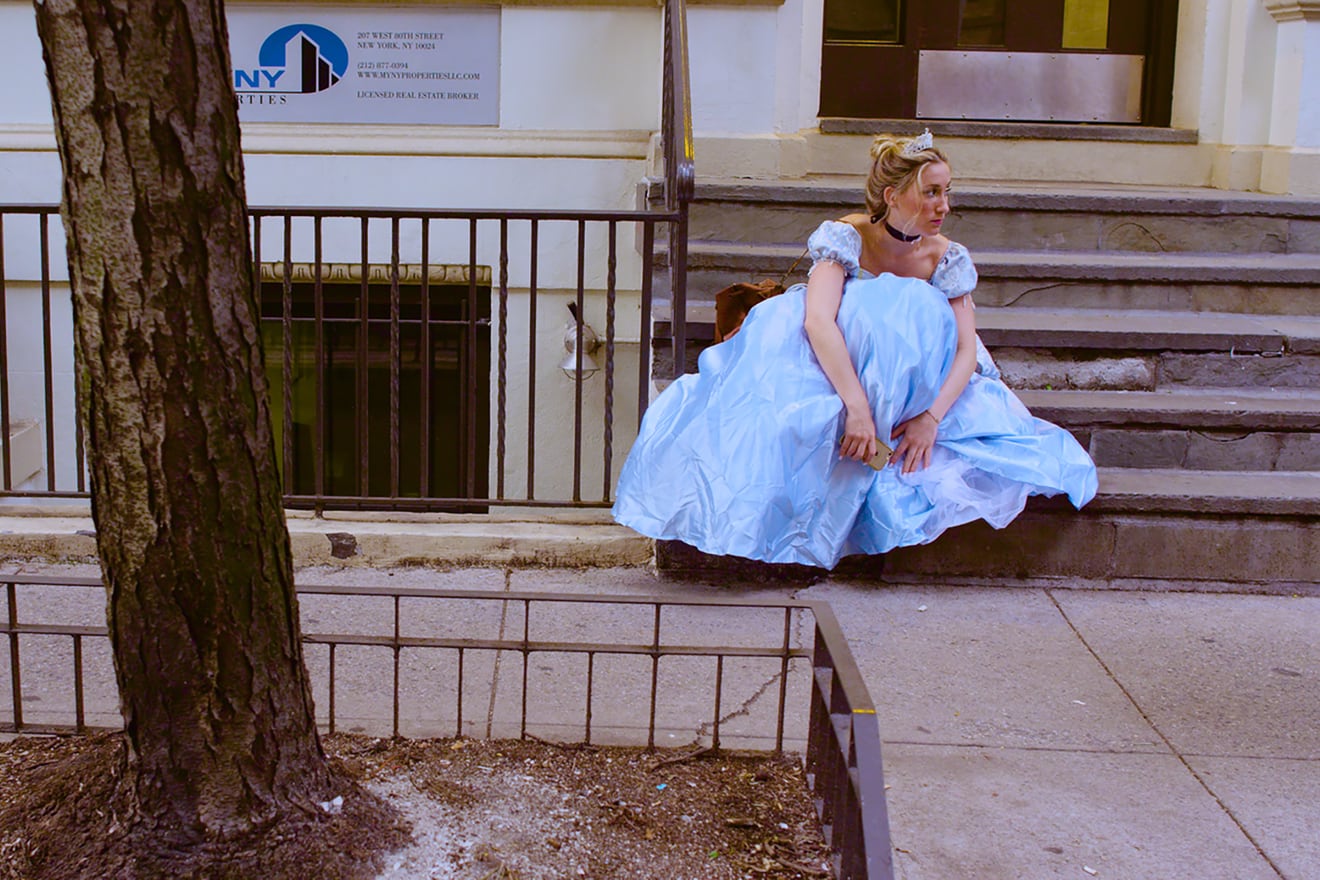 Life Hack is an uber-relevant comedy about our lack of internet privacy from the creators of the hit TV show Unreal, while Status Pending is about a couple trying to keep up with everyone else’s portrayed happiness on social media.

For a Girls’ Night Out 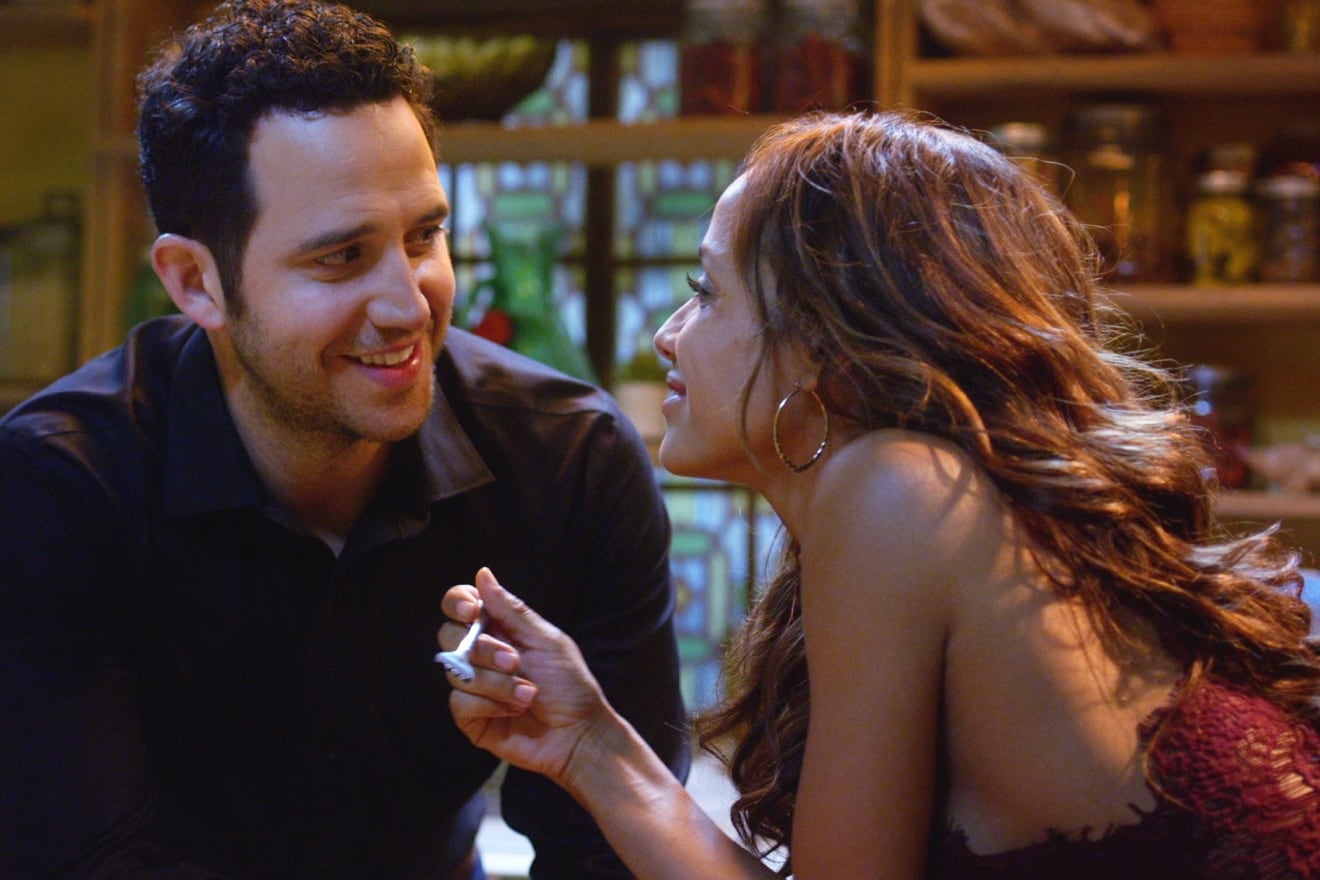 Still from Off the Menu

Grab your girlfriends – and maybe a few drinks beforehand – and head to the screening of Buttercup, a story about best friends, or a light-hearted romantic comedy like Off the Menu and Can’t Say No. 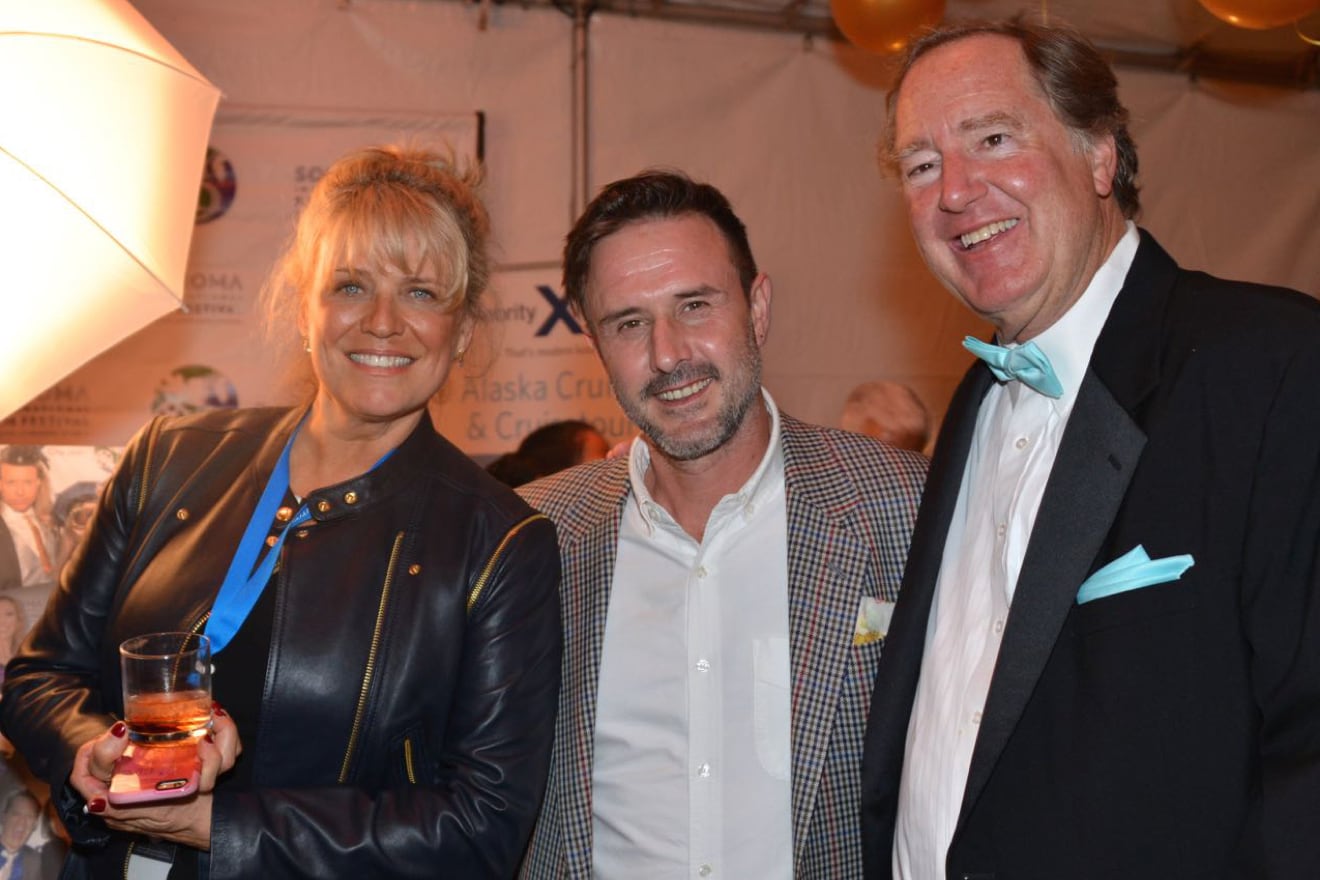 It wouldn’t be called Sonomawood without a little glitz and glam. You’ll want to add at least one of these after parties to your festival schedule.

On Thursday evening, mingle with the locals and filmmakers for the Plaza Stroll, a free festival event. Several Sonoma Plaza hot spots, including Burgers & Vine, Hare & Hatter, and the Sigh tasting room, will be offering drinks and bites.

After you’ve seen Frank & Ava, a film about a “near destitute” Frank Sinatra trying to salvage his career, don your best Rat Pack attire for a Frank & Ava-themed party on Friday evening in The Backlot Tent. The event will include a multi-course, wine-paired progressive dinner created by local winery chefs. Then to close out the weekend, the jury’s picks for the festival’s best films will be announced at Saturday Night’s Awards Ceremony, also taking place in The Backlot Tent. Both events cost $50, unless you’re a Soiree pass holder.

Although it’s unfortunately sold out this year, you’ll want to keep the Chefs and Shorts Gala Dinner on your bucket list for next year’s festival. In partnership with Canada’s Devour! The Food Film Fest, this event will bring in five top chefs to collaborate on a five-course dinner with wine pairings. Each course is creatively inspired by a short film, which will be played in between the dishes.

When you’re not enjoying the films, everything you could ever want or need – like food, fun, and sleep – is within steps of the film festival on the Sonoma Plaza. 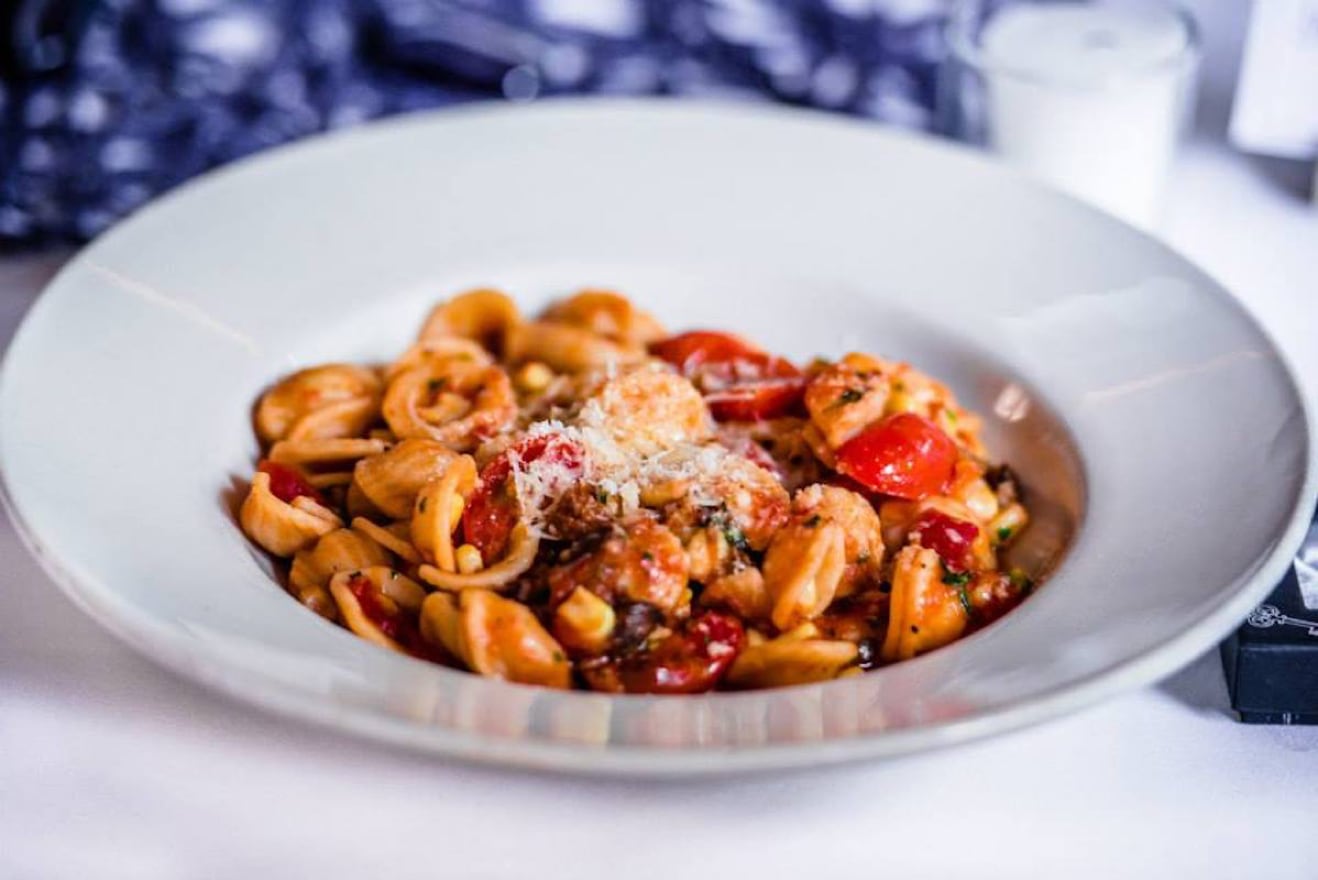 Fill up on authentic Italian cuisine, like Tagliatelle with beef, veal, and pork ragu, at the historic Depot Hotel Restaurant. Start with the Salumi Platter of house-cured meats and if the weather is nice enough, opt to dine on the terraces that surround the calming garden and reflection pool. The girl & the fig is a must for all visitors to Sonoma. The 20-year-old Sonoma staple serves up farm-fresh, French country classics like steak frites, croques monsieur, and duck confit. Want to sample it all? Hop on this Gourmet Food & Wine Tour of the Sonoma Plaza. 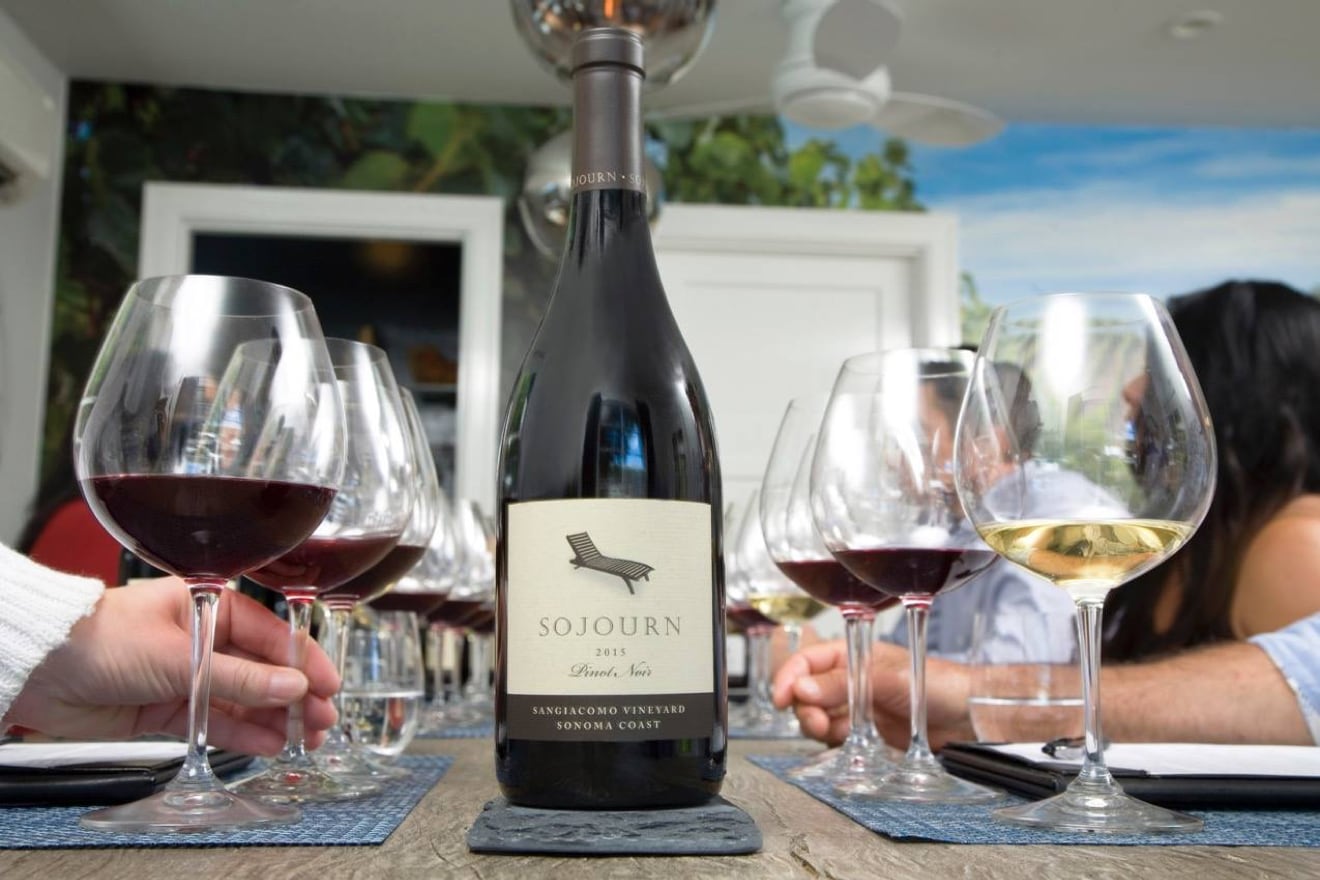 You can go wine tasting by foot right on the Sonoma Plaza, which is lined with cozy, boutique tasting rooms like Sojourn Cellars, best known for producing phenomenal single-vineyard pinot noir but also fantastic chardonnay and cabernet sauvignon. Pinot fanatics will love the Root 101 experience at WALT Wines, a journey of single-vineyard pinot noirs sourced across 1,000 miles of the California coast paired with a selection of tasty bites. Sparkling wine lovers won’t want to miss a visit to the swanky SIGH. Sonoma’s only bubble bar features a wide range of high end champagnes and sparkling wines from all over the world.

Take some time to learn all about downtown Sonoma’s rich history, for the town played a pivotal role in California’s declaration of freedom from Mexican rule, with a visit to the Sonoma State Historic Park, which includes the Mission San Francisco Solano. 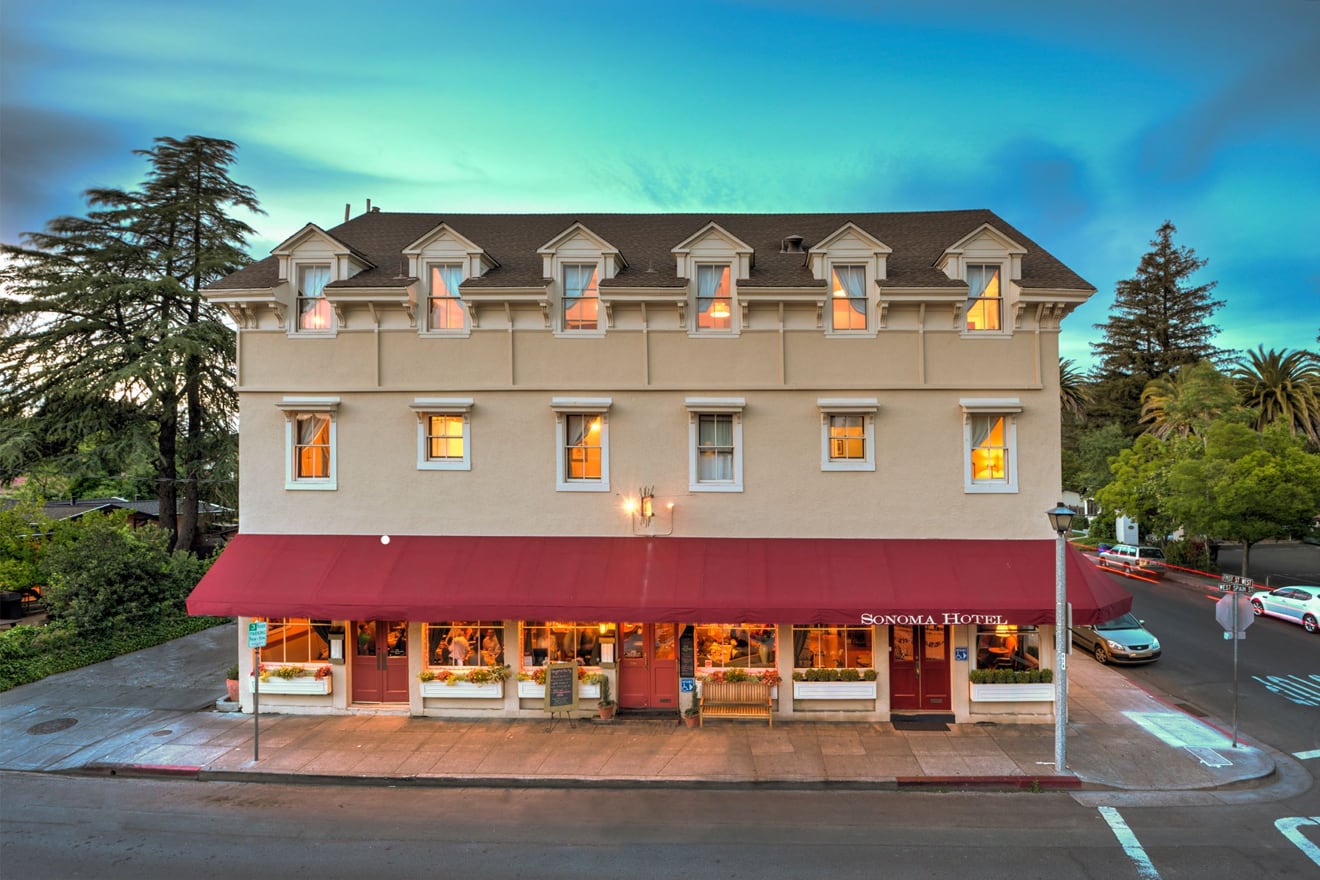 From a luxury palace to quaint B&Bs, there are many places to lay your head right on (or near) the Sonoma Plaza. Rest like true royalty at the opulent Ledson Hotel, where oversized quarters, marbled vanities, imported glass chandeliers, and wood-carved ceilings take you back to times of grandeur. At the idyllic MacArthur Place Inn & Spa, you’ll feel far removed from downtown Sonoma. Set on a former 300-acre vineyard and working ranch, MacArthur Place boasts 64 country cottages and guest rooms, lush, winding gardens, on-site steakhouse, and a rejuvenating spa. Foodies will want to post up at the Sonoma Hotel on the Plaza, located upstairs from the locally-famous he girl & the fig restaurant. Cozy and charming guest rooms fill this historic, 19th-century building and feature a blend of antique country furnishings and modern amenities.

Jess Lander is a freelance wine, food and travel writer based in Napa Valley and exploring all things California wine country. Follow her on Instagram at @willwrite4wine to get Napa and Sonoma #travelinspo.